I’ve been updating some of my old code and answers with Swift 3 but when I got to Swift Strings and Indexing with substrings things got confusing.

Specifically I was trying the following:

where the second line was giving me the following error

Value of type ‘String’ has no member ‘substringWithRange’

I see that String does have the following methods now:

These were really confusing me at first so I started playing around index and range. This is a followup question and answer for substring. I am adding an answer below to show how they are used.

All of the following examples use

Strings got a pretty big overhaul in Swift 4. When you get some substring from a String now, you get a Substring type back rather than a String. Why is this? Strings are value types in Swift. That means if you use one String to make a new one, then it has to be copied over. This is good for stability (no one else is going to change it without your knowledge) but bad for efficiency.

A Substring, on the other hand, is a reference back to the original String from which it came. Here is an image from the documentation illustrating that. 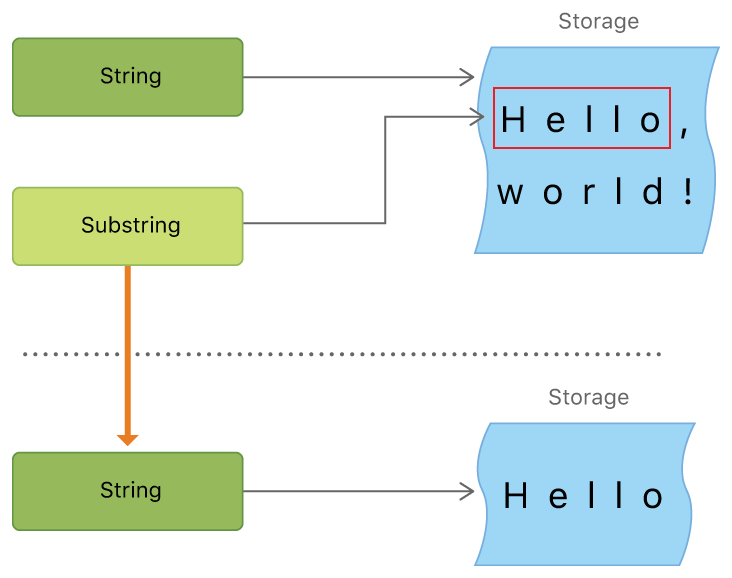 No copying is needed so it is much more efficient to use. However, imagine you got a ten character Substring from a million character String. Because the Substring is referencing the String, the system would have to hold on to the entire String for as long as the Substring is around. Thus, whenever you are done manipulating your Substring, convert it to a String.

This will copy just the substring over and the memory holding old String can be reclaimed. Substrings (as a type) are meant to be short lived.

Another big improvement in Swift 4 is that Strings are Collections (again). That means that whatever you can do to a Collection, you can do to a String (use subscripts, iterate over the characters, filter, etc).

The following examples show how to get a substring in Swift.

You can get a substring from a string by using subscripts or a number of other methods (for example, prefix, suffix, split). You still need to use String.Index and not an Int index for the range, though. (See my other answer if you need help with that.)

Beginning of a string

You can use a subscript (note the Swift 4 one-sided range):

End of a string

Note that when using the suffix(from: index) I had to count back from the end by using -10. That is not necessary when just using suffix(x), which just takes the last x characters of a String.

Range in a string

Again we simply use subscripts here.

Don’t forget, when you are ready to save your substring, you should convert it to a String so that the old string’s memory can be cleaned up.

I’m hesitant to use an Int based index extension after reading the article Strings in Swift 3 by Airspeed Velocity and Ole Begemann. Although in Swift 4, Strings are collections, the Swift team purposely hasn’t used Int indexes. It is still String.Index. This has to do with Swift Characters being composed of varying numbers of Unicode codepoints. The actual index has to be uniquely calculated for every string.

I have to say, I hope the Swift team finds a way to abstract away String.Index in the future. But until then, I am choosing to use their API. It helps me to remember that String manipulations are not just simple Int index lookups.